>(crossposted to both LiveCP’s blog and Postcards From Holland)

Monday is the first Blogging Against Disablism Day 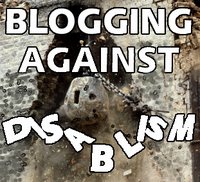 Click on the image for more details. Or read this post* of Lady Bracknell’s or In The Deep, which is something I posted to my blog earlier in the week to read just why it is important that we do this.

I’ve been meaning to post about this for a few days but never got round to it. Then earlier tonight I found a quote which I thik says it all:

It’s time we stopped putting up with acts that have an adverse affect on our lives and being treated like second class citizens. And as the quote says – the only way we can overcome disablism is by refusing to put up and shut up any longer. It’s time to become what some people may consider “unreasonable” and fight for our rights.

*Prior to reading that article last weekend I had never heard the one in seven statistic however since then I’ve encountered it in more then one place. Including learning at Naidex that the RNID (Royal National Institute for the Deaf) publish a magazine called One in Seven.