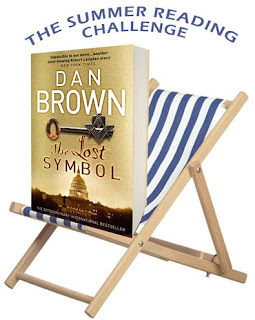 [image description: a blue and white stripped deck chair with a copy of Dan Brown’s The Lost Symbol in it.  Above that the words The Summer Reading Challenge are written in an arc (split in two lines with challenge on the second).  Plain font, dark blue.  The background is white]

Prep is about a young girl, Lee Fiora, who goes to boarding school far from her family for the entirety of her high school years.  She is a scholarship student and really doesn’t feel like she fits in at Ault, the school she goes to, nor does she enjoy it as much as she expected.  That’s not to say she didn’t have a good time there and she didn’t make friends because she did.  She just spent a lot of time alone and a lot of time worrying about what people thought about her.

I really enjoyed Prep.  So much so that I was up until 3am last night finishing it (I couldn’t sleep and figured I’d read a few pages… a couple of hours later I’d read over 100 pages, it was finished and it was 3am) as it was hard to put down.  Really I should probably say that I loved this book

This was the perfect book for someone like me who grew up reading school stories and wishing she could have gone to boarding school.  Nicely nostalgic and very well written.  I could relate a lot to Lee and the other characters, I saw bits of myself as a teenager in them and it bought back memories both good and bad of my school days and teenage years.  I wondered about Lee and why she was the way she was but didn’t come to any real conclusions, nor does the book give any real answers.  I think that is a great way for the book to end as it leaves the reader to make up their own mind and keeps you guessing after you turn the last page.

One of the things I particularly liked about this book is the fact that it mostly sticks to her school days and other than I think two occasions it doesn’t deal with her return home for holidays and visits.  That does mean that some time gets skipped but that doesn’t jar at all and it works really well.  I think if more of Lee’s time with her family was included the book would lose focus and not work so well.  I also liked the way it was written in retrospective – a now adult Lee looking back at her experiences and describing them with hindsight, which brings more depth than if they were being described at the moment they occurred.  It also allows the author to bring in some of Lee’s post Ault experiences to the descriptions and they added to the story as well.  Those glimpses into the future Lee were intriguing and made the character more real.

I’ve not read anything by Curtis Sittenfeld before; I’ll be looking out for more of her books now.  And I’d particularly like to see a sequel to Prep.

This review can also be seen on Amazon