>I spent last weekend (Friday – Monday) at Center Parcs, Longleat Forest.  I’ve been to Center Parcs loads of times but it had been about 12 years since I last went to Longleat.  Center Parcs are great at access.  They don’t get it all right and there were some very obvious frustrations and places where I thought they could do better. They provide some very detailed accessibility information (in a series of PDFs) on their website and I thought I would blog (with photos) about how I found it.  I’m splitting this into more than one entry for length.

We stayed in a 2 bedroom “Comfort Plus” villa.  This is where the first problem came into being.  We booked a 2 bedroom villa as 2 of us were going to go. When we got given our villa number we looked on the accessibility statement and saw it was 3 bedroom.  So we assumed it was a free upgrade, because these things happen when you’re disabled!  And my friend called Center Parcs and added her mum to our booking.  We arrived to find our villa was, indeed, a two bedroom villa.  I spoke to two different people about this. One of them (on the phone) blatantly didn’t believe what I was saying but the other (in person) said that some of the villas had originally been unadapted and had bedrooms taken out to make adapted bathrooms and that was what had happened here and they’d missed it on the website.  I’m not convinced I believed them mostly because I thought the location of the adapted bathroom would have been strange for a bedroom!  It wasn’t a problem for us, luckily, because as we’d booked a 2 bedroom villa what we had was all we were entitled too.  I was assured, however, that they will fix the mistake on the website.

Outside of the adapted villas there is a disabled parking space and you get a lovely neon orange sign to go with your blue badge so you can keep your car onsite.  So that along with the ID sticker they give everyone makes for a positively colourful dashboard.  Normally people must move their cars to the car park, the only exceptions being people staying in adapted villas and anyone staying in an unadapted villa where the driver is the disabled person (this did cause some confusion when we first arrived as the person checking us in didn’t realise that if your in an adapted villa it doesn’t matter who the disabled person is or who the driver is).  Unfortunately one of the lights outside our villa was broken so there was a mobile lighting gantry and it had been put in the disabled space.  A source of much amusement when I called security and told them and asked them to move it. At that time it wasn’t working anyway.  So the tech guys came and fixed the light and didn’t move it.  Eventually it was decided it couldn’t be moved as light was more important but said basically find a spot and leave it, we know.  Everyone was very apologetic about it and they really kept us informed. 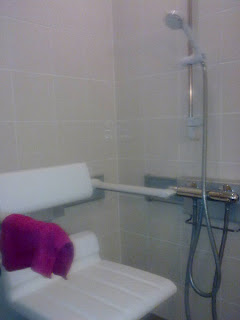 Shower set up.  Those arm rests attached to the seat (one on which is covered by my flannel) are all there were for grab rails by the shower.  The position of the seat along the wall was adjustable but if you could adjust the height of it we couldn’t figure it out!  I can’t stand up straight but we think I’m around five foot three, five foot four height wise and my feet couldn’t touch the ground on that seat. 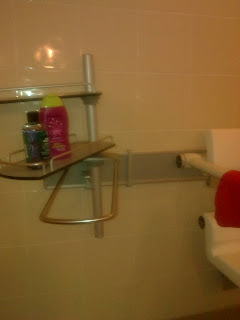 Shelf thing on the right of the shower seat as you sat on it. Useful for putting stuff on and also moveable I think. 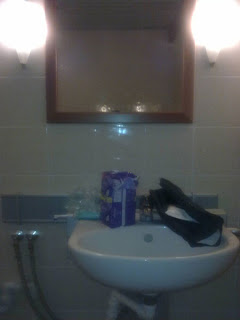 Sink set up.  The position and I think height were adjustable which led to some middle of the night amusement when people were half asleep and forgot it moved (I think you should be able to adjust it so it only moves when you want it to but it wasn’t set like that).  The area was well lit with a light each side of the mirror.  Unfortunately the mirror was a little bit too high for me in my wheelchair.  I think you can just see the top of my head in this photo.  Good job I didn’t want to do my make up whilst we were away!  I’d have liked one of the shelf things like in the shower by the sink for putting my toothbrush etc on. 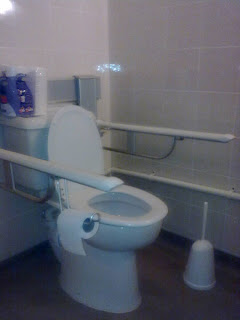 The loo.  One drop down grab rail each side, height adjustable.  Given the way they were on the wall they were in their lowest position here.

Overall this was a very functional bathroom and I managed well with it. Probably one of the better adapted bathrooms I’ve seen in a holiday place and with loads of space.  The loo and sink are next to each other and then there is a big space before the shower meaning you have lots of room to turn, manoeuvre and for carers to assist..  It was clean, the door was a sliding one so didn’t take up space (although it was heavy and didn’t have a lock).  There was a red cord but it was tied up.  The alarm only sounded within the villa however (which is fine in my opinion) so I left it tied up on the grounds I could shout if I needed something.  I would have liked a few more grab rails, especially in the shower area as the lack of them meant I needed help transferring in and out of the shower when I don’t normally.  It was lacking a privacy curtain but what disabled  bathroom isn’t?!  My only tiny complaint I’ve not covered is the fact there were complimentary toiletries in the regular bathroom but not in the adapted one.  Crips like freebies too!

I didn’t take pictures of the hall but it was huge.  Plenty of room in there to get round and also if you only use a chair outdoors you could easily leave it there fully set up and not have it be in the way.

The kitchen I could get my wheelchair in but it wasn’t adapted at all so it’s a good job we ate out mostly!  I did just about manage to make toast one morning but someone had to reach plate and cup down for me.  Both the fridge and freezer were accessible.  There wasn’t room to turn but the kitchen is small and I could have reached all sides without moving (and at once probably!).  You wouldn’t get more than one person in there if one was a wheelchair user!

The dining area/table, kitchen and lounge are all open plan.  There was room to get my wheelchair round the lounge but only just.  The sofa was very very comfy and lovely but low and a pain to get up of off.  I ended up having to roll off the sofa onto the floor and then crawl to my wheelchair to get up.  There is a high back more supportive chair in the bedroom which you could move but it would be a very tight fit in the lounge! 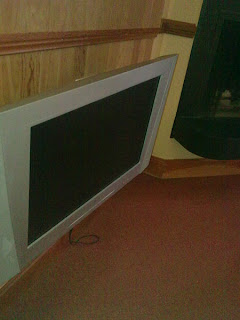 Very low wall mounted TV in the lounge.  We didn’t watch any TV really but it didn’t feel comfortable watching it there, it was a bit low!  I suspect all the villas have their TVs there as there was a hole in the unit below it with a DVD player in it.  But I can’t help feeling that’s a stupid place in a wheelchair accessible villa.  With the TV one side and the coffee table the over it was tight and I did knock it once or twice. 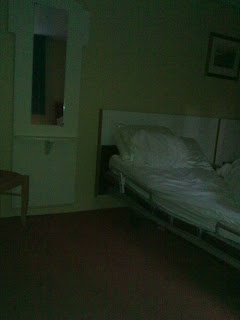 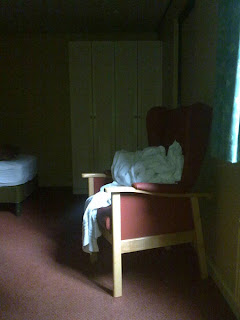 Two pictures of the accessible bedroom, both taken from the door.  The top shows the electric bed (this was a twin room with one electric bed) and gives a rough idea of how much space.  The second shows the high back chair, wardrobe and part of the other bed and basically is just to give more of an idea of space.  You could easily have two wheelchair users staying in that room and fit two carers assisting in at the same time (although not to sleep, obviously!) there is absolutely buckets of space in there.  You would, obviously, have to fight over the electric bed though!

The other bedroom in the villa is a double and isn’t accessible as such.  You could just about get a wheelchair in there (although I didn’t try) but you’d not get round.

Overall I was pleased with the accessibility of the villa although you certainly couldn’t manage there in an all disabled group if you were all (or the majority) wheelchair users.