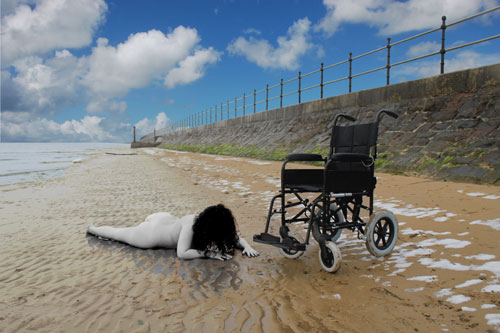 On the eve of the second reading of the government’s controversial Welfare Reform Bill, on 9 March, disabled activist Kaliya Franklin stripped off to demonstrate what the result would be for disabled people across the UK if disability benefits are slashed to the bare minimum.
The photo shoot depicts a naked Franklin lying on the sand on a wintry beach, next to her empty wheelchair.
“I was absolutely frozen when I took my clothes off for the photo shoot,” says Franklin, “but it was nothing like as cold I and other disabled people will be if the government removes our essential benefits.”
The Left Out In The Cold awareness-raising campaign is being organised by disability rights group The Broken of Britain, of which Franklin is a founder and director.
Says Franklin, “It’s vital that every able-bodied person remembers they are just an accident or illness away from being disabled themselves. Many people think if they do become disabled that the state will look after them.
“But the fact is that even under current provisions, disability benefits are not enough for disabled people to live on. If the Welfare Reform Bill is passed, the situation will become unimaginably worse.”

In January, Franklin released a video on YouTube that explained how able-bodied people would be in for a major shock if they found themselves needing to apply for disability benefits. The video can be seen at http://www.youtube.com/watch?v=q7EXSpmrVMU.

The Broken of Britain group has been campaigning since summer 2010 to raise awareness of the government’s wider anti-disability policies. The group has consistently drawn attention to disabled people being the target of unjust government rhetoric and sham consultations, tabloid slander and political myths.

It says: “We are now the targets of deep and damaging cuts to disability services that are contained in and symbolised by the Welfare Reform Bill. The Bill disguises cuts and changes to a number of benefits, from housing benefit to Income Support that will punish disabled people.”

1. Kaliya Franklin and other case studies are available for interview.

2. A high resolution version of the campaign photograph is available on request.

4. Contribution-related Employment Support Allowance will be restricted to 365 days, meaning that a married claimant would be unable to claim after a year if their spouse works.

5. The Welfare Reform Bill confirms that Disability Living Allowance will be replaced by the Personal Independence Payment which will use unfair assessment and conditions to disqualify 20 per cent of the current DLA caseload.

There is no evidence that supports government’s claims that DLA is “broken” and in need of reform. In fact, most evidence suggests that DLA is an efficient and popular benefit, and this support includes the vast majority of the DWP’s own research.

The inclusion of this benefit change in the Welfare Reform Bill took place before the consultation on DLA reform was completed.

6. Other cuts to disability services not included in the Welfare Reform Bill are:

• Plans to remove security of tenure from social housing tenants, as costly adaptations are a barrier to moving regardless of size of property.
• Many changes to the provision, entitlement to and charges paid for receiving social care and disability services provided by local authorities.
• The Independent Living Fund which provided for the highest level support needs in combination with the local authorities is now to be scrapped without consultation.
• Access to Work reform redefines what it is “reasonable” to expect an employer to provide for disabled staff, meaning it is likely to push many currently employed disabled people out of work and back onto benefits.

7. Disabled people are more likely to live in poverty than any other group in the UK and more likely to be unemployed or in low paid jobs. 60% of those with a work-limiting disability are unemployed, with 25% wanting to work.

Left Out In The Cold by Kaliya Franklin is licensed under a Creative Commons Attribution-NonCommercial-ShareAlike 3.0 Unported License.
Permissions beyond the scope of this license may be available at http://thebrokenofbritain.blogspot.com/.