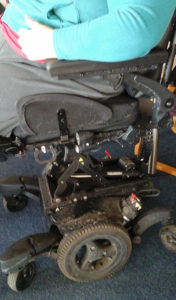 I’ve been disabled from birth and I’m proud to be a wheelchair user.

I love my powerchair, it’s scratched and squeaky, muddy but magic.  I’ve dripped pasta sauce all over it and bled on it. I’ve tangled the wool from my crafts under it and had to call for help when a duvet cover got jammed in the wheels.  I’ve drunk cocktails in it, danced in it and carted home heavy bags from the supermarket in it. It lets me live my life and do what I want. Someone described it as my independence but it’s more than that, it’s a part of my body.

This chair has taken me on over 1700 miles of shopping, appointments, memories, struggles and life in general in the 18 months I’ve had it. But lately it feels as though people are forgetting about me, that I’m Emma and more than the wheels that move me.

(I originally wrote this at a blogging workshop about telling your story. The exercise was to take a photo of you or part of you and then write a short piece/caption)

*blows away cobwebs and looks around*

I haven’t blogged for ages – I lost my mojo for a lot of things but especially blogging last year.  And over the last few months I wrote several blog posts and then lost them because it seems my ipad hates my blog.  I’m not sure what’s going on there but I’ve just posted and backdated three entries that I managed to rescue (there are probably another three that were totally lost to the abyss).

I don’t want to say that this year is looking like it’ll be better than last because I think it’s too soon to say.  But what I will say is that I went to a blogging workshop put on by Soha about 10 days ago.  And I did some writing there for this blog that I really like.  I got good compliments for it too. So that will be up in a day or so and I left feeling inspired and ready to write again.  I would like to say I’m coming back here with a bang.  That’s probably rather more pressure than I need and somewhat unrealistic so I’ll just say I’m back and do so quietly.  Back with a bang can come later if I manage to keep this up.  I hope so. I have missed it.

I will post a catch up on how things are later in the week.  If I were to give a brief summary it would be “The last few months brought a couple of changes to my life and this week is bringing another pretty big change to my life. I think potentially it’s going to be very good but it’s been difficult to get to this point and I’m a bit apprehensive about it.”

One of the things I’d like to do more of this year is blogging about books.  I mean, really I’d like to read more but if I manage that I’d like to share more about it.  I love reading and I miss being part of a community of book lovers and sharing that.

Reading has been a struggle on and off for the last year or so in part due to my depression.  I’m now on Sertraline again rather than citalopram and although it’s early days I seem to be feeling better.  Getting back in a routine after Christmas is probably helping that too.

I didn’t complete my Goodreads challenge last year for the first time since I started doing them in 2013.  My goal was 95 books (having reduced it twice from the original 120 books) and I read 92. That is substantially better than the 66 books I read in 2016 but makes it my second worst year for books read.  However my total page count was 30,863 which makes it my second best year for pages read.

Currently I’ve set my challenge for this year to 75 books.  But more than a particular number of books I’d rather get back to reading regularly as opposed to boom and bust. I need to break my fanfic habit!  I would also like to track what I read but abandoned because I think I must have read but never finished at least 20 books in 2017.  Ideally that goal would be to abandon no books (or at least fewer book) but when I thought about it I decided that life is too short to read bad books.

Lately I’ve been on a Harry Potter kick again.  I was crocheting a Gryffindor blanket for a friend’s daughter who is discovering the books for the first time (they are on Order of the Phoenix right now) and is a big fan.  I thought the audiobooks would be a good companion while I worked on it.

It’s interesting how I seem to take something different from them each time I read them. Lately I’ve been noticing how little any of the adults in Harry’s life seem to think about his needs.  And about the lack of pastoral care at Hogwarts.  I’m sure there are fanfics which address both things but I’m  resisting the urge to look for them.  I think the first is probably because it’s fantasy and the abandoned hero on a quest is a bit of a fantasy trope.  The second is probably missing for two reasons – awareness and support are much bigger things nowadays than they were when the first books were being written.  And at the heart of things they are children’s books and children probably wouldn’t be interested in that.

I’ve just reached the beginnings of the Battle of Hogwarts in The Deathly Hallows so if I don’t finish it today I’ll finish it tomorrow.  As always the darkness of this section took me by surprise. I won’t be rereading Cursed Child right now, I liked it but I didn’t think it was brilliant.

I have several really interesting review books on my TBR, including a couple of intriguing looking thrillers.  I also got lots of books for Christmas.  And I didn’t even try for my usual January book buying ban and bought a copy of Frosty Mornings at Castle Court which is part two of Holly Hepburn’s new serialised novel.  I will read that next and then either Anatomy of a Scandal by Sarah Vaughn or Things A Bright Girl Can Do by Sally Nicholls.