I received a free review copy of The Gravity of Love by Noelle Harrison and am taking part in the blog tour today.

In love, there’s no such thing as a coincidence …

In small-town America, Joy Sheldon loves the plants that bloom in the desert but longs too for the sea’s elemental wildness. It’s a dream never realised – and now, facing the brutal truth that her husband is a cheat, Joy learns of unimaginable secrets in her early life. Riven by betrayal and loss, a chance encounter with the enigmatic Lewis, Joy embarks on a journey to seek her true identity – and to discover why the sea pulls so strongly at her heart.

Lewis Bell, abandoned by his mother and responsible for his wayward sister, is now living the dream. An ambitious young graphic designer, he’s aiming for the big time – if only he can keep his creative spark. His talented girlfriend Marnie adds pressures of her own and, as Lewis’s troubles intensify, sixties London fast shows its darker side.

Unexpectedly drawn together, Joy and Lewis fly across the Atlantic to the Irish coast. She’s in search of a lost mother; he’s looking for a lost love. They need to make peace with the past, with themselves and others. But the truths they encounter and connections they create will transform everyone’s lives forever.

Bold, intimate and joyful, this glorious novel deftly interweaves decades, continents and lives to tell a story of the irresistible gravity of love.

The Gravity of Love was a really nice read that I enjoyed a lot.  There was enough to the plot to keep me guessing and wondering what would happen next.  I had wondered if I would find the two different time periods made it hard to follow but that wasn’t the case at all.  In fact it was the perfect book for a tired day – it kept my attention and I enjoyed it so much I kept reading after I planned to stop but it wasn’t so complex it took more concentration than I had (I have been struggling with more complex reads for the last week or two).

The different settings were very well drawn.  I’ve never been to Arizona and I’ve only been on a blink and you’ll miss it trip to Ireland (one night) but I could picture them very well.  I knew a couple of the places mentioned in London so it was nice to see somewhere familiar.  But then I realised that it’s not familiar because those sections are set in 1967, many years before I was born let alone visited.

Joy was a character who I really felt for.  She’s spent most of her life doing for other people and not doing what she wants.  This has left her feeling stuck and influences most of her journey in the book. To me she came across as someone well into their 50s and I was shocked to realise several chapters in that she’s only  two or three years older than I am now in the 1987 sections so isn’t even 40.  It felt like a good example of what life has done to her and who she is when the book starts.

Currently The Gravity of Love is available for 99p on Kindle. There are far worse things you could spend that money on than this book. 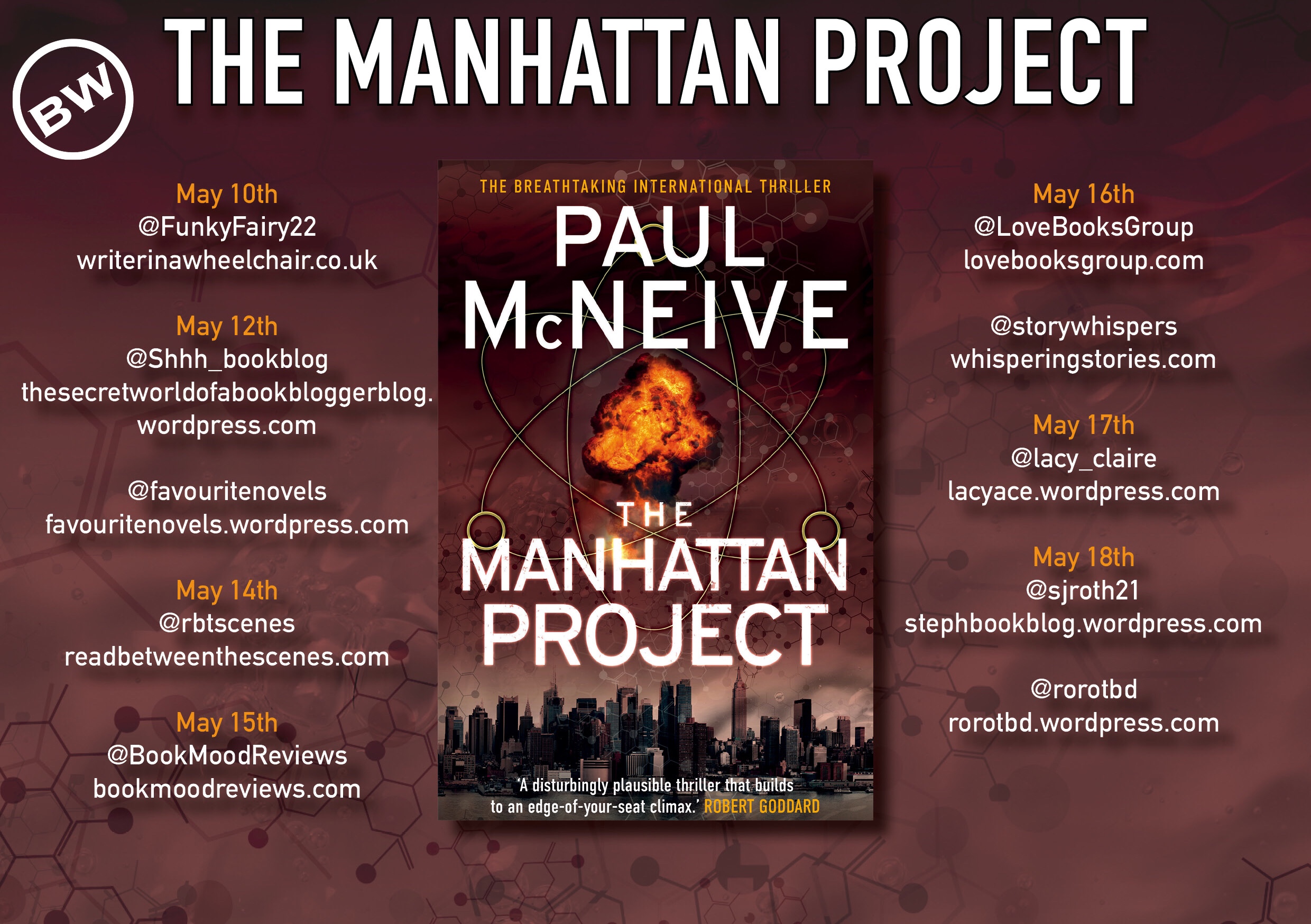 Today I’m taking part in the blog tour for The Manhattan Project by Paul McNeive. This thriller is being published today and Black and White Publishing kindly sent me an advance copy for review.

Here is the blurb:
New York City is under attack. Millions may die. But the enemy’s weapons are invisible, undetectable and creating terror at lightning speed. Now, there’s nothing to stand in their way …

A Libyan fast food entrepreneur coerced by threats to his family

A New York cop falling fast for an elusive beauty

Visitors to Tokyo from the desolate villages of southern Afghanistan

One terrible desire connects them all – one man’s burning need to finally avenge those who died at Hiroshima and Nagasaki. With a brilliantly audacious and devastating plot to bring America to its knees, can anyone save New York from disaster?

I wasn’t sure if I was going to like this book. It sounded like my sort of book but whilst I love a thriller I hate horror and I wasn’t sure if it would be too close to horror for me. In fact it was basically the perfect thriller. It had a creepy feel that I loved and kept me guessing the whole time I was reading.

Paul McNeive has taken an event most people have heard of, a cast of interesting characters and a very real threat that in the real world is known but perhaps not taken as seriously as it should be and created an amazing tale. It’s completely plausible that some variant of what happens in the book could actually happen and that just added to the tension I felt as I read it because that’s a scary idea.

This was genuinely a book that was hard to put down and of all the books I’ve blogged abut so far this year is probably the one I’d recommend the most. I haven’t been able to stop thinking about The Manhattan Project and more specifically the issues raised by it since I finished it.