I’ll find you is a psychological thriller. It was released in ebook earlier this week and will be out in paperback in May. Here is the blurb:

Emily Jacobs, a nurse, is in hospital for a minor operation. When she wakes in the night, woozy with anaesthetic, she sees the doctor frantically trying to resuscitate the woman in the bed next to her. In the morning, she is told that she must have had a nightmare. The bed has been empty all along . . .

When Emily returns to work she discovers a bracelet that she believes belonged to the missing woman. Soon, she becomes convinced that her colleagues at the hospital are hiding a terrible secret.
What if she’s wrong? What if her own troubled past has affected her more than she knows?

But what if she’s right?

What else could they be capable of?

I’ll Find You is a book I nearly gave up on it before I really got started with it. There’s one scene in the first chapter that really, really freaked me out and made me not want to read it. But I decided to read chapter two as well before deciding that and it made me want to keep reading. That scene was actually the worst one in the whole book for me, the rest was suspenseful and kept me guessing but not freaked out.  I would say if you want a book that is truly terrifying all the way through this isn’t for you, but if you want one that keeps you on the edge of your seat with an undercurrent of fear it could be.

Emily was a really interesting main character whose story highlights both how easily other’s can manipulate opinions and that we can be completely alone while surrounded by people.  I wished we saw more of her relationships with other people, particularly the police inspector, Geraldine Sutton. I also thought Emily’s backstory would have made a good novel that I’d be keen to read.

The hospital setting is an interesting one. I thought some of what happened was unrealistic (but I don’t have the medical knowledge, particularly of private hospitals, to know for sure). But using somewhere we are often at our most vulnerable but are told we are safe as a setting for a psychological thriller was a brilliant idea.

I liked I’ll Find You and think it could make the perfect introduction to the psychological thriller genre.

To read more of the posts from the blog tour for I’ll Find You by Liz Lawler see below: 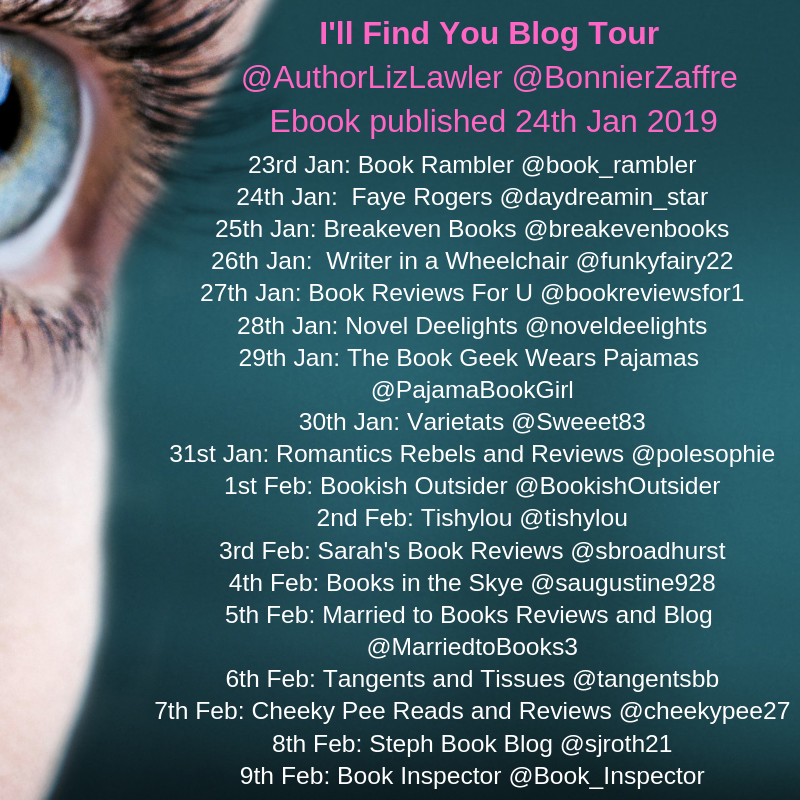