Have a go at mosaic making

I went to a mosaic making workshop last Saturday (a week ago, not yesterday).  It was a whole day thing and it was so much fun.

My mum was supposed to come with me but was unable to.  So a friend came with me and that made it better.  I would have enjoyed it with my mum and I was sorry she wasn’t there.  But my friend isn’t crafty and was looking forward to it but wasn’t sure she’d be able to do it as she’s not creative.  She’d even told her husband to expect her to come back with a pile of materials in a bag, in a bad mood because it hadn’t worked out.  She got really really into it and enjoyed it loads, so that made it fun.

I’d half wondered if I would struggled to cut the tiles etc.  And then when I got there and saw the nippers and the cutters I’d wondered that even more.  But I managed really well.  And the only tiles I couldn’t cut, my friend tried and failed to cut too.  So that made me feel better.

The first several times I cut tiles it made my legs spasm (clonus, not extension), then they’d stop, I’d cut something else and they’d go again.  A combination possibly of the amount of pressure needed on the nippers and cutters (especially the nippers) and also the loud noise when they cut through – it didn’t exactly make me jump but it was louder than I expected and I do tend towards things making me jump and then spasm.  I was joking that it would be a good way to burn some extra calories, those shaky legs but thankfully it didn’t last very long and it did eventually stop.  The tiles I used/cut are all different shapes and one or two are on as is.

We didn’t do grouting in the workshop, just cutting tiles and arranging etc.  There weren’t any facilities for grouting where we were.  Two of my pieces I love as they are but another two I wonder how grout would make them look.  We were told to leave gaps so the background would show through like grout.  I didn’t do so great at that with some of my pieces!

I made four things throughout the day.  I think the first thing I made is my favourite.  I would like to give it another go but I don’t think it’ll be something I do all the time, just maybe if they had another workshop. 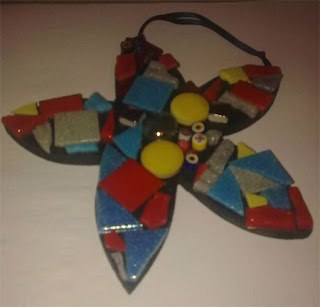 I think this is a flower, but the woman running the workshop described it as a star.  It’s a piece of wood painted black with tiles on it. Mostly red and blue but with some silver and a tiny amount of yellow as an accent colour.  The yellow was the tutors idea and it really made it pop.  This is the first piece I made and as I said, my favourite.  It has a navy ribbon at the top so it can hang.  I plan to hang it in front of the window but it’s on my desk here. 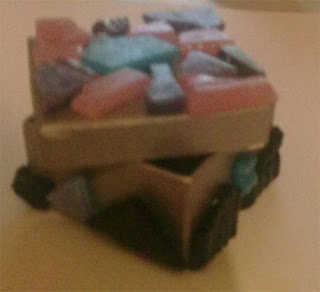 This isn’t a particularly great photo, I took them on my phone and although it usually takes relative good pics this isn’t one of them!  It’s a small silver box.  On to top it has light purple and pink tiles in various shapes with one bit in blue as an accent.  The sides of the box have black tiles and each side has one bit of the blue.

Two coasters.  These are the last two things I made and the two I wonder how they would look grouted., especially the one on the left.  There are a lot more gaps in these.  One is all different shades of green, including a bit of a sparkly one.  The other is green, purple, a small amount of a bronzey brown and a dark pinky purple in each corner.  In the absence of grout I have considered taking some glitter and putting that in the gaps on these but I’m worried it might break it make it look terrible (and I only have pritt stick in the house glue wise).

I plan to do some more all day craft workshops, it’s a lovely (if tiring!) way to spend a day, especially with a friend to enjoy it with.