I’m paying a second visit over at Bea Magazine this month.  I wrote about the disability issues which were raised by the news that paralympian Oscar Pistorius has been arrested on suspicion of murdering his girlfriend Reeva Steenkamp.

You can read it here:

Disability and the Reeva Steenkamp Murder

The coverage of disability in the media has always been problematic but I’m really hoping this might be the beginning of it changing. I suspect that it’s more likely that it will change the way violence against women is covered by the media than disability.  Still I hope.

Last year I was asked to speak to the local paper about my sailing group having some new equipment after fundraising for over 6 years and raising half a million pounds for it.  It was on the phone and I did tell them I was a wheelchair user because it was relevant (the equipment will mostly help wheelchair users and means I can be more independent).  I didn’t tell them that I had CP.  But in the article it said “Ms Crees who has cerebral palsy and uses a wheelchair said…”  Because that’s what defines me in their eyes.

That and another experience a few years ago where something I said was taken slightly out of context to make it appear like a terrible disability thing in a news clip mean I would be very wary talking to the press again. Basically they obviously really wanted to me to answer yes to a question and wouldn’t stop asking me varients of it.  In the end I said along the lines of  yes it seems like that to you but…”  The final news clip had me just saying “yes it seems like that.”

And I’m just me.  A regular crippled girl who writes and likes to sail.  I’m not high profile at all.  The fact that Oscar Pistorius is high profile is a big part of the reason why there are so many issues relating to disability in the coverage of Reeva Steenkamp’s death but it’s not the only reason. Crimes are committed by disabled people every day.  People are murdered everyday, sometimes by those disabled criminals or by others.  That doesn’t always hit the news. This did and brought with it issues about disability magnified to a whole new level.

I didn’t think of this until after I wrote the piece for Bea but I suspect disability is why it’s getting so much coverage.  If a regular Olympian, say, Greg Rutherford (being only he was the first to come to my mind) was accused of the same crime it would be a big deal.  But I’m not sure it would be quite as big a deal with so many people shocked and talking about it as when it’s the so called “Disabled hero”

I’m not the only blogger who has been tackling these issues.  William Peace has also written about the problem of disability role models (in which he also covers Helen Keller) over on his blog Bad Cripple.

>I’ve been working over the last few days at promoting One Month Before Heartbreak.  Yesterday I was disappointed because someone who had asked what they could do to help refused to do so.  Today, not so much.

This morning I got a text from Sair telling me that Month Before Heartbreak was in the top ten UK Twitter trending topics.  Yes, my small project “What if we did this.” was a UK trending topic on Twitter 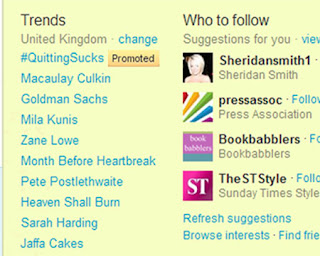 [screenshot of trending topics including One Month Before Heartbreak (without the one though)]
I’m loving that we trended the same time as Macaulay Culkin – it’s probably the only time I’ll see a celeb I’ve heard of trending on twitter without thinking “crap did they die?!”
Then I went out to lunch with a friend and her son.  Which was a lot of fun. And came home to discover that we’d been mentioned on the Guardian website as a part of Society Guardian.
It’s pretty unbelievable that my “small idea” is getting so far reaching.  I’d just hoped to get a few people writing and a few more reading. I’m astounded at all this.  It really is all sorts of awesome.
I am so excited by all of this and to see what else we can achieve with One Month Before Heartbreak and there’s still ten days to go.
Thank you so much to everyone who has tweeted and blogged about this – I didn’t make this splash all by myself.
Edited: Oh yeah and the third awesome thing is from yesterday or the day before but… I sent a post to Cheryl for her to put on her blog about One Month Before Heartbreak.  And discovered that she has an Emma Crees category on her blog.  I have my own category on someone else’s blog (with three entries in it!).  Not sure that belongs in this entry but what the hell.
All content copyright Emma Crees, 2006 – 2012 unless otherwise stated
http://writerinawheelchair.blogspot.com